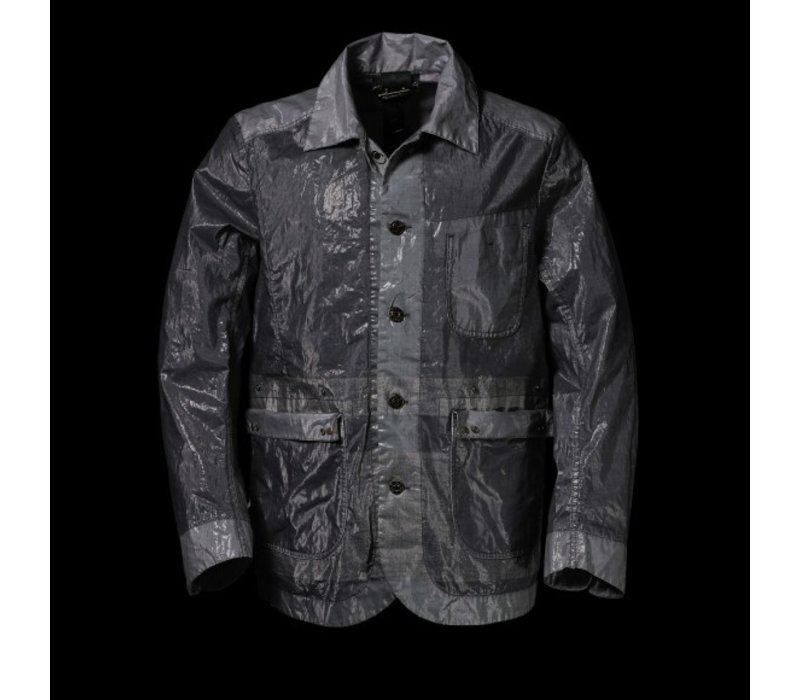 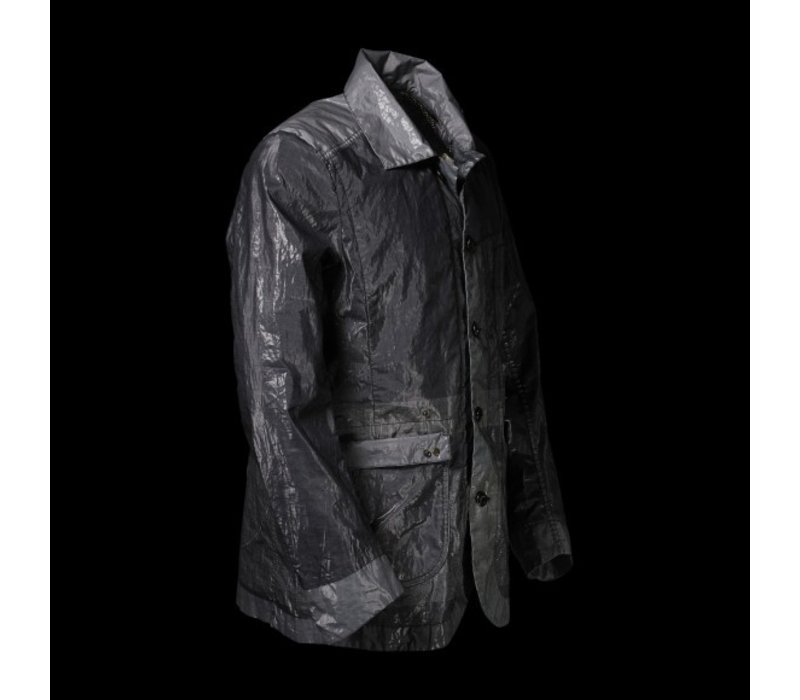 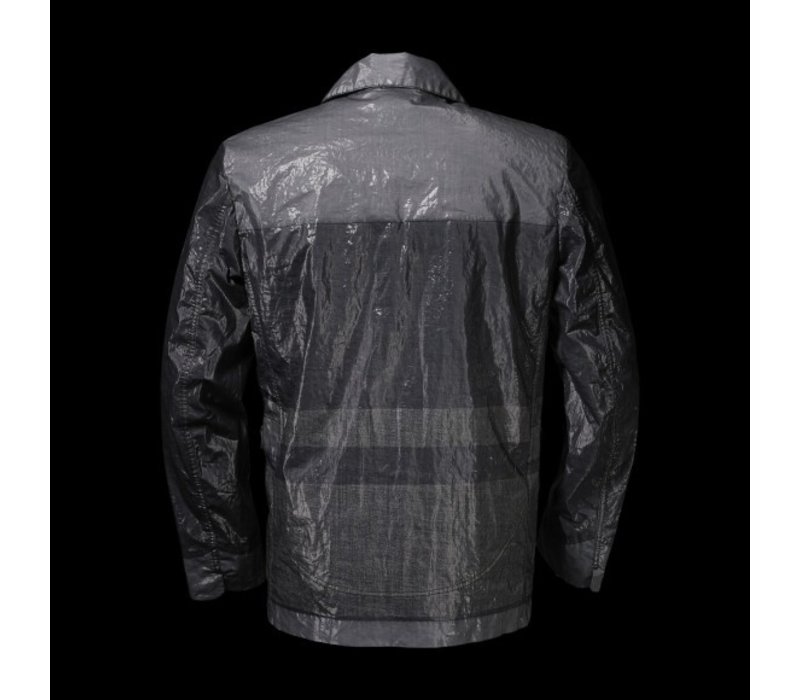 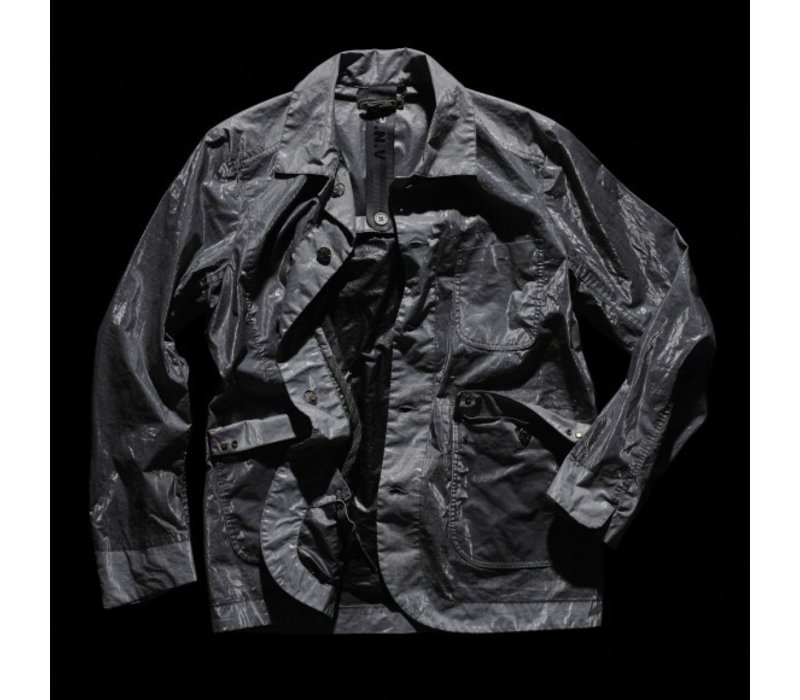 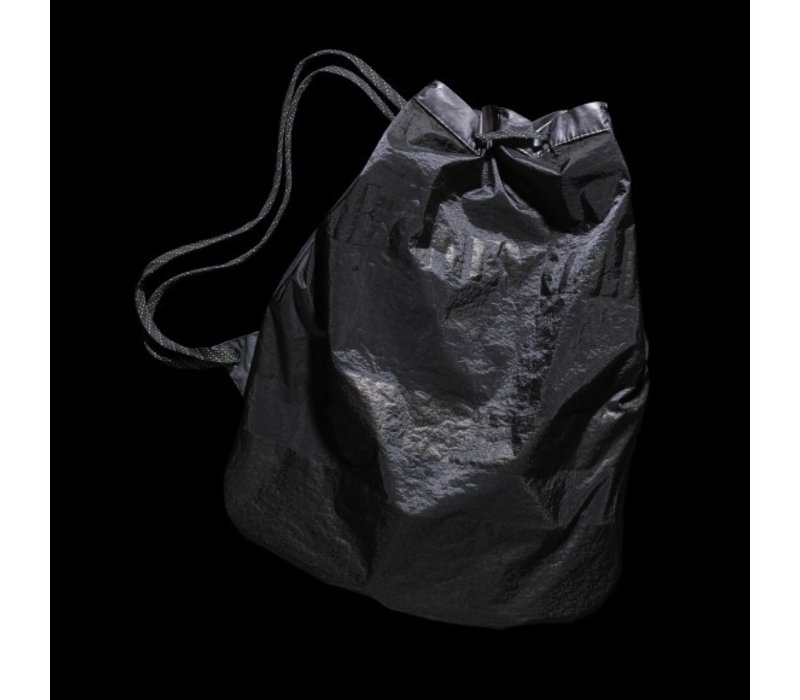 Serving as both an outer garment and duffel bag, the garment-dyed Sharp Engineer demonstrates a skilful marriage of both form and function. Internal cording, capable of receiving a Kit Liner, can be removed and threaded through embroidered eyelets to transform the jacket to its bag state.
Its silhouette and multi-pocket design has been derived from the study of a great range of engineer's jackets, chore coats and other working attire seen in both military and commercial settings throughout the last century.
The Boneville logo with nautical bands has been printed on the inner back of the jacket, visible when the bag is constructed.
This Sharp Engineer has been crafted from a blend of ramie and polyurethane. The former is one of the world's oldest fiber crops, known to have been used for at least six thousand years. Ramie fiber is widely recognised for its strength, shape retention & unmistakable silk lustre. A water resistant coating (polyurethane) is applied to the base fabric to further bolster its capacity to repel water.
This piece has been garment dyed which results in a wonderful array of highs and lows throughout the fabric, giving it a grand sense of depth that few other processes can offer.

Launched in 1981 by Massimo Osti, famous for its iconic Navy Arctic range.
To elaborate the results of his extensive research, Osti decided to create a second menswear line, Boneville, following the launch of his first brand C.P. Company, one that would precede the launch of Stone Island a year later.
The brand was created to find a use for the tremendous volume of ideas and experiments that seasonally exploded from Osti’s volcanic mind. From its ‘81 launch to its final days in 1993, Boneville set a benchmark in the men’s fashion arena, pushing boundaries both aesthetically and technically, adding to the rich tapestry that is the career of Massimo Osti.
In 2012 serial entrepreneur and avid Osti fan John Sharp bought the Boneville brand, an acquisition carried out with view to reintroduce the brand to market and tastefully further the Osti legacy. In the years to follow this purchase Sharp began to build a team he felt capable of reviving an Osti classic, a group of talented individuals that have since came together to breathe new life into the Boneville brand.
Boneville of today exists as a grand testament to the timeless, innovative nature of Osti’s work. The brand features two divisions; Boneville and B.N.V. Sporting Goods, each boasting a unique aesthetic though bound together by a distinct naval influence and maritime character.
Rather than merely replicate Osti, Sharp and his creative team have warmly embraced his ethos of innovation and research-lead design, the result of which is a new Boneville that delicately strides forward beyond the remits of the original.